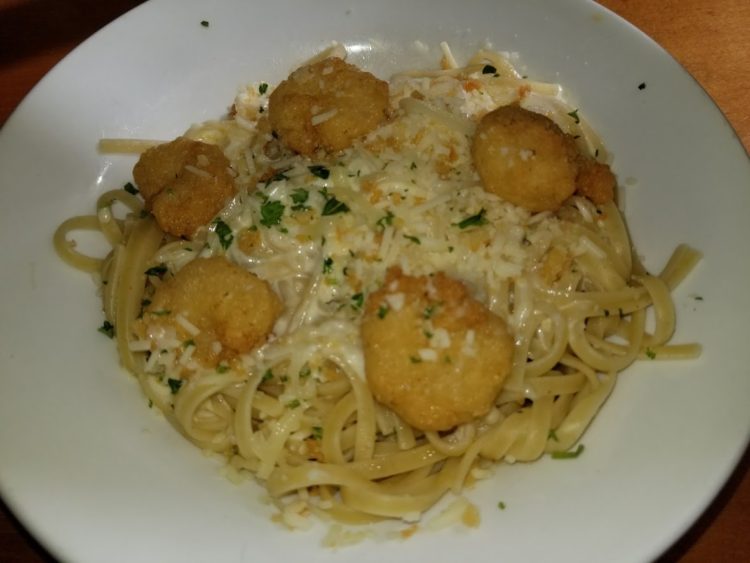 If you’ve been following along, you may have seen that I’ve been doing the “Make Me Shrimpy” theme the past couple of days, with the goal of losing a couple of pounds from exceeding my calories this past week outside of my normal Olive Garden meals, with the likes of Pizza, Ice Cream, Candy, etc… So I committed to lowering my calories from 2600 to 1400, and having 3 smaller meals a day, instead of 2 larger. I was 155.6 pounds on Monday, and today I’m 152.8, which is lower than when I started this journey on September 25th at 153 pounds. I can now resume eating 2600 calories again, YAY! Today starts “You’re My Favorite”, eating refill-sized portions of my FAVORITE Never Ending Pasta Bowl combinations, 3x a day. This should be DELICIOUS. Let’s start with my current #1, Whole Grain Linguine, Asiago Garlic Alfredo & Crispy Shrimp Fritta:

Yum. Do I even need to give you the rating? You can probably tell, this is another 10/10. I also had a delicious Breadstick to go along!

At lunch today at the Inverness, FL location, I was seated next to another Pasta Passholder so I struck up a conversation with him. His name is Richard, and he had an interesting story as to how he got his pass. On Sept 14th, aka Pasta Pass day, he was outside the Inverness location at 2pm when the promotion launched on the website. He was using his phone, and instantly tried and was given the dreaded “Sold Out” message, and was sent to the Waiting Room, where most unfortunately end up with disappointment. Richard still needed to eat lunch, and went inside at this time as he figured he wouldn’t get one, and inside you typically don’t have cell service at all. After he ordered his food, his phone showed a message that he indeed could get a pass, as someone must have not checked out in time while in the cart, so it was reallocated to someone in the waiting room. He ran outside, continued to purchase, and ended up buying one off his phone.

Richard mentioned his staple combination tends to be Spaghetti, Traditional Meat Sauce & Meatballs, but sometimes switches it up for Rigatoni, Traditional Meat Sauce & Italian Sausage. He hasn’t tried the Creamy Mushroom yet, nor has he attempted the Gluten-Free Rotini, although I suggested to give it a try, as he might be surprised. He said he doesn’t like the Fettuccine, and he loves the Zuppa Toscana. He works close by, so the Pasta Pass works out great for lunch. He overheard that I ordered a refill instead of a full size, and said he’s going to do that himself next. He also said he’s going to specifically ask for 1 breadstick, like I did, instead of wasting extras. He tends to go most days, despite missing all last week from being sick 🙁 I gave him my card, and invited him to the Final Pasta Pass gathering event on Nov 19th! He said he will check it out and try and make it.

Another thing I forgot to mention yesterday, as I was caught up with the Halloween fun, is I had a (phone) interview with Michelle Stark, who is the Food Editor for the Tampa Bay Times, which is the largest newspaper in Florida. Stay tuned for an article about m 8 Weeks of Pasta journey, which she should be publishing in the next week or so!

Here is the nutritional information for this meal: